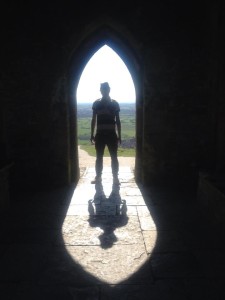 Growing up between Liverpool and Manchester Daygan felt the influence of the local live music scene from an early age. Finding an abandoned mandolin at the age of 9 had a profound effect, and he started his first band at the age of 14 playing Indie Rock music.
Through rediscovering the sweet sounds of the mandolin and also developing a love for the bouzouki,Daygan has slowly moved from Indie  to Folk  fusion and went on to be a founder member of the band Dragonsfly and is one of the core members of Celtech as well as having his own solo show and leading his new own project“ Daygan and the music magic experience” .
For Daygan, music is a conglomeration of lots of aspects of his life and beliefs, from magic to the discipline and skill involved in developing musical abilities. He loves the creative spark between the band members and the friendships too.
Amongst other things, Daygan also has a passion for pottery and art(ceramics degree and teacher),Italian scooters and motorbikes (he has a fab 1960’s lambretta and other bikes) and body art . He loves to explore ancient historical sites, travelling to stone circles with his  mandolin , enjoying and rekindling the bardic heritage of this land. Daygan is one of the bard’s of Avalon.His local stone circle is Stanton Drew, which he regularly visits . He loves connecting  with the land and  the many aspects of nature in these places of inspiration and magic.
Instrument info-
His mandolin is a Paul Hathway handmade, with a solid top and cedarwood flat back. His bouzouki is a handmade Richard Osborne flat back, with a solid top of spruce and fruit woods.
He also plays banjolin, bass  guitar and Irish drum.

Whilst it's common practise nowadays to listen to everything online, often for free, I encourage you to support musicians you like, by simply buying their music.